Q: What was Alovenus like when she was a human on Earth?
A: She’s non-existent. When Alovenus became a deity, her human self vanished completely as if she had never been born.
Unfortunate Person of this Work #1
Tyrannical Twelve Stars: Aquarius of the Water Pitcher
Although she had the tendency to forget people’s names, she was actually quick-witted, and her ability to judge the situation allowed her to serve as the brain of the team when Ruphas and Pollux were absent. Her high combat power and special ability made her a cheat character…That was how she should have been, but her debut was a bit too late. She was an intelligent character with the Water attribute, but unfortunately, Dina had both the Water and Metal attributes and was already in the party from the beginning.
Her strongest skill, Absolute Zero, had the ridiculous ability of condensing and firing cold air at absolute zero temperature. If it landed a direct hit, even the Dragon King would be incapacitated for a short time. It could even semi-permanently contain flowing lava. Its accuracy was also high. It was a powerful arcane magic with high power, high accuracy, and super long range. It also had a high probability of freezing the target. It was a terrifying skill, but since its debut was against an ouroboros, it appeared to be quite trivial…
She wasn’t weak. In fact, she was actually strong. It’s just that the opponent in her first battle was too extreme.
Unfortunate Person of this Work #2
Tyrannical Twelve Stars: Pisces of the Fish
For some reason, the other unfortunate person was also one of the Twelve Stars with the Water attribute. He had high overall abilities just like Aries. Except for Luck, his other abilities were even higher than those of Aries. He’s a highly flexible character. He was an all-arounder who could fight in both close range and long range. Furthermore, he could possess an enemy and control them, or possess an ally and strengthen them.
He had the largest domain in Midgard and was blessed with a background setting as the son of the Goddess. His initial location was in the sea and he also didn’t have a strange personality like the other members. If Ruphas had approached him from the start, he would have joined the party and become unbeatable right from the beginning.
But for some reason, Ruphas passed him over, so he only joined the fight late in the game. Moreover, the opponent for his first battle was the Evil God, followed by an ouroboros. Thus, he couldn’t show off his abilities at all.
Like Aquarius, he wasn’t weak. He’s super strong. It’s just that his opponent was too extreme.
Aquarius: “Requesting better treatment!”
Pisces: “That’s right, that’s right!”
Furthermore, there didn’t seem to be many opportunities for them to shine since it’s already the final arc of the story.

This chapter’s title contains a reference to a Pokémon move called Mimic. 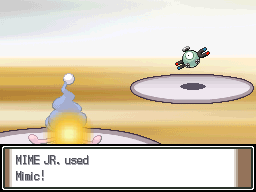 This web novel chapter should bring us to the start of the light novel's final volume (Volume 9).
The exciting return of the hero Sei…will NOT be shown next chapter! Instead, we will bring you the extra chapter that nobody asked for! Be prepared for the advent of the useless goddess, Aqua Alovenus!