Adventurer—Jean, according to what he said himself.

He swung his sword and slashed at the golem. However, it did not even break the golem's rocky shell. Unable to feel pain or fear, a golem's thought process was extremely simple, determined only to hit the opponent in front of itself. Free from fear and dread, even its mechanically repetitive attacks were a threat. Jean took a step back immediately to avoid that straight punch, but his face made it clear that he was nervous.

"Ah, such an outrageous punch! If you take one hit, you'll be in trouble!"

Two adventurers stepped forward before the golem to cover for Jean. Their weapons were two swords and an axe. Was it so that one would emphasize speed, while the other would emphasize power?

One man slashed at the golem multiple times with his swords, while the other delivered a heavy strike on the golem's arm. The man in the rear continued to shoot with his bow, covering for the three vanguards.

I felt that it was not a bad combination, but… 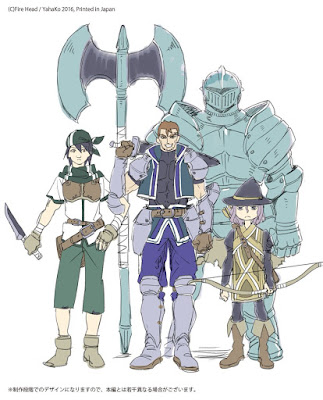 It might be possible with magic attacks, but these guys were all physical types. They could not penetrate the golem's defenses and shave off its HP. Despite their desperate attacks, the golem probably took only 2 or 3 points of damage per hit. Actually, the golem only took a total of 13 points of damage so far. On the other hand, if they were hit once by the golem, it would be "Amitābha!"

It couldn't be helped…I felt bad about helping those who came to help, but it was better than just watching them die. I sighed and glanced at Aries.

Aries happily answered my instruction, kicking off the ground to approach the golem. He agilely passed through the gaps between the adventurers who were in the way. A flaming fist crushed the head of the golem and blew off the body with his momentum. The golem struck the wall, falling into pieces and never moving again. It was just a small fry to Aries. One hit was enough against something with HP 9100.

The golem that they were struggling against was instantly destroyed. The four adventurers watched with their mouths agape.

Oh, as I thought, did this hurt their pride?

As I thought so, they started cheering like kids.

Oh, that was a fairly favorable response. But that surprised the wide-eyed Aries, who was tripping over his words. I did not expect such a reaction, but for now, I needed to separate Aries from the men surrounding him.

"Calm down, adventurers. I know you are excited, but you are troubling Aries. Also, Aries is a boy, not a girl."

As I thought so, his companion, the light warrior, knocked him from behind.

"Shut up, Jean. You are a bother to others."

At least someone here was quiet and easy to communicate with. Honestly, I did not like people who were overly excitable. How should I say this? It was too stressful for my ears. Well, this was a game, and I was a player.

"Ah, ah. I get it. Uh, well…Even though we came to help, we were helped instead. Thank you."

"It doesn't matter. I'm thankful for the good will."

I tried to console Jean, who seemed slightly depressed. He tried to help us despite his lack of ability. I felt that such manly behavior should be praised. In the blink of an eye, his face was dyed red. Such a simple man.

Nice person. I wanted to laugh at this description. Certainly, the current me inside this body was not a scoundrel. I did not commit any crimes. I was just an ordinary person…but Ruphas Mafahl invaded the world two hundred years ago. She was truly a villain, or even a villain among villains. Being addressed as a "nice person" was somewhat embarrassing.

"Oh. I haven't introduce myself. I'm Jean, an adventurer and a warrior."

"Me, Ricardo. Class, heavy warrior. Nice to meet you."

The four introduced themselves. I thought that this party was too unbalanced. Three out of four were warrior-type vanguards. There was neither arcane magic user nor healer. There was no ranger as well.

I thought that Ricardo and Nick should become wizard and cleric, leaving Jean as the well-balanced warrior. Shu would have been better as a ranger instead of an archer. Archer wasn't bad, but narrow spaces like this limited his abilities. It was usually better for the rear-guard to be magic-type classes. For example, enemies with high physical defenses and low intelligence—such as the golem earlier—required magic-type classes.

Actually, I had multiple classes, but that would be too abnormal for the current standards of this world. Therefore, I chose one that appeared to be most helpful in the current situation. Unarmed combat was the specialty of the grappler class. A ranger fighting with his bare hands would just be considered a weird ranger. However, if a grappler used ranger skills, that would obviously be abnormal. Thus, I decided to call myself a ranger.

"Also a traveling merchant, Dina. My class is ranger."

Having never once used a ranger skill, she must be just saying whatever came to mind. There were many mysteries surrounding Dina, but I would leave it for now. Still, I preferred she chose a class different from mine.

And finally, Aries. He definitely did not understand, simply copying his lines. What should I do with this? A party with all three members being rangers. We became a team that was clueless about party balance.

Sure enough, Jean was amazed, composed himself, and said:

The leader of a party with mostly warriors was worried about me.

What was this? This indescribable feeling of humiliation.

This was awful. As a matter of fact, I could explore this low-difficulty dungeon all by myself. Only a dungeon such as the Goddess' Sanctuary would require a party of five or more Level 1000 players. Oh, and one of the five players (Megrez) was taken down in one hit by the gatekeeper.

"Don't worry. Our levels are high."

"Brute force with high levels? …Such an elegant-looking party, yet filled with muscle-brains."

What was this muscle-brained leader of a party filled with warriors saying?

What should I do? I had an urge to smash his head in with an over-sized boomerang right now.

What did he just say? I wondered if he came here just to distract and stress me out.

"Well then, your fighting strength will be insufficient. Okay, I owed you yesterday, so we will go as your bodyguards!"

Eh. No thank you.

Uh, they were just a burden earlier. They couldn't even shave off HP 100 from the golem. Why were they so confident?

"Is it alright? Then, please take care of us!"

—no thanks. Dina covered my mouth before I could finish and accepted them without my permission. I removed her hand and stared at her in reproach, but Dina merely smiled and said:

"Isn't it fine, Ruphas-sama? Let's have a little fun before we get to Libra-sama. Since they are offering to come along, why not use whatever is available?"

Dina smiled and said, "Let's use them as shields." I shuddered at her words. It seemed she was more rotten on the inside than I imagined. For now, it was fortunate that her rottenness was directed at my enemies. Or perhaps, I just didn't notice when it was directed at me.

"Well, we just have to support them without going too far."

If we left them be, they would be slaughtered by golems. If we went all out, their confidence would be shattered. Therefore, we could only pretend to cooperate to defeat the enemies, even though Aries and I would be the ones really doing the work. In short…We could only secretly use them as shields like Dina suggested while we proceeded forward.

I sighed. I glanced at Dina to reproach her for her selfish behavior, then moved forward. The four adventurers followed with Aries and Dina trailing behind. Well then, let's get to the top floor when Libra was.

We advanced in the unnecessarily wide tomb. The only positive thing about the tomb was that the area became smaller as one went up the floors. Its pyramid shape implied that the journey would be easier towards the top. The problem was that the golems' levels went up as well.

A sound echoed as golems clogged the passageway. I checked and found the golems here to be Level 300. It seemed high-performance golems would start appearing. At this level, the adventurers would die with one hit, so it was really bad. We must destroy the golems before they attacked the adventurers.

The golems gave a strange cry and attacked the adventurers. As I intercepted their attacks, the golems stopped for some reasons. Aries also went in between another adventurer and a golem, that golem stopped as well. What was going on?

They did not merely stopped attacking, but also backed off when facing us. In the end, they mysteriously chose new targets, and even aimed for Dina, who was in the rear.

Was it possible…that they recognized me and Aries as allies?

When it came to golems of this level, I would have made them with higher AI. These golems were smarter than the ones in the previous floors. It wasn't surprising that they could recognize me and Aries, even after the country was destroyed. Otherwise, they would attack even Libra.

…Eh? Why was Dina being attacked?

Looking at Dina being chased by golems, I felt somewhat sad. Aries also looked at Dina with sympathy.

Amitābha is a celestial buddha in Mahayana Buddhism. He is said to appear before those who call upon him in their moments of death. Conversely, calling upon his name is sometimes used to imply death.