A Wild Last Boss Appeared 47: Congratulations! Parthenos Has Evolved Into A Vengeful Spirit!


“So what does this mean, Dina? Back then, I’m sure you said that the Twelve Heavenly Stars are alive and well, but…”

“Uh, uh…ah, that. Because the barrier was maintained, I guessed that Parthenos was still alive. Or rather, why does the barrier still exist even though Parthenos is no longer here?”

In response to my queries, Dina made uncomfortable excuses and raised questions about the existing barrier. It might seem like excuses, but her question was actually justified. Alioth’s barrier was the type that was triggered by his own death. However, this barrier was the duration type which would disappear after some time. It was really strange for it to persist after one year. I thought it might be possible at a high level, but Dina’s reactions seemed to indicate otherwise. In that case, the question was why the barrier remained.

“About that…After her death, Granny stayed in this world out of grudge. She is currently a vengeful spirit wandering somewhere in the forest.”

“So the Maiden actually…”

Basically, it was Dina’s misunderstanding that the Twelve Heavenly Stars were all alive and well. This was caused by the remaining barrier, which led Dina to believe that Parthenos was alive. But the truth was that Parthenos died and the barrier was maintained by her grudge. I could not blame her for the insufficient research. Nobody could have expected reality to be so cruel.

“For the time being, I’ll let it pass by meeting her first.”

It was pitiful and unbearable for someone with the title of “the Maiden” to abandon her body and become an evil spirit. Honestly, I was happy that she was so loyal to me (Ruphas), but I felt sorry for her too. It would be necessary for me to liberate her.

“Virgo, right? Do you know where Pathenos’ spirit is?”

“No, I don’t…but she should be somewhere nearby.”

In response, Virgo shook her head. Since the barrier existed, she must be nearby. However, it was difficult to grasp a spiritual entity, so even her granddaughter Virgo did not know her exact location.

“So how do you know that she has become a ghost?”

“Oh, about that. I saw granny when she occasionally came out to maintain the barrier.”

Virgo replied in a straightforward manner to most of Aries’ questions. The two of them kept chattering on about various things.

Dina was muttering and sighing that her role was being overlapped, but it seemed to me like the one that Virgo overlapped was Aries. Aries’ use of formal language was superior…Actually, he only used formal language with me, so this would be how he would ordinarily speak. Virgo was certainty not like Dina who was fixated on using formal speech at every situation.

“So why don’t we just wait for the barrier to weaken?”

“The maintenance was done a while ago, so I don’t think she would come out soon.”

I simply thought we could wait it out, but according to Virgo, this plan was bad and likely to fail. The barrier was recently reset, so she wouldn’t appear for the time being. She would probably appear if we were to wait for a few months, but it would be very troublesome…Well, we were not in a hurry, so maybe it would be good to wait patiently. As I was drawing this conclusion, I sensed Aigokeros raising his magical power and quickly turned around.

“In that case, we just have to break the barrier. Leave it to me!”

“Please be at ease, my master! Let me destroy this barrier and drag Parthenos out!”

Ignoring my words, Aigokeros the idiot activated his magic. This was the advanced Moon-attribute magic—Invisible Break, which was a kind of cancellation magic that removed duration-based magic. If there was defensive and support magic, there would also be magic that could nullify them. This was the role of Aigokeros among the Twelve Heavenly Stars, canceling the support magic of the opponents. This was something I treasured a lot.

However, I did not say that he could use it now.

The sound of glass shattering echoed through the forest. At the same time, I could feel the protection of the forest vanishing. He just had to do it, this stupid goat. Among the Twelve Heavenly Stars, he was the one who never listened to what other people were saying. I could understand that he was revved up for the first time in a while, but this was too aggressive. What if Parthenos mistook it for an enemy?

“I understand you are an overly anxious idiot, but think before you act next time.”

I glanced around the forest and lightly reprimanded the goat who was looking at me in self-satisfaction. Aigokeros looked as if he was depressed, but I couldn’t care less. Since I was here, I didn’t think Parthenos would consider us to be enemies.

I crossed my arms and silently waited a few minutes for Parthenos to appear. Since it became like this, there was no choice but for her to appear and repair the barrier. The problem was that she might consider us as enemies for breaking the barrier and attack us. She should know me, but since she was now a vengeful spirit, she might have forgotten me in the worst case scenario.

But a vengeful spirit? I should not believe in something so occult, but I still accepted it readily. Well, after I have experienced so many bizarre things, I could not be surprised with something like a ghost. I merely felt: “Oh, so ghosts really exist.” As such, I was confident that I would not be surprised even if a zombie or ghost appeared before me. I was getting so accustomed to strange things that I was feeling numb.

But as we waited, nobody showed up. Time continued to pass.

Dina, who was beside me, was strangely in tune with my muttering. I thought she would appear immediately, but I was disappointed. Had she already pass on? Or did she maintain the barrier at fixed intervals and sleep the rest of the time?

After that, we continued waiting for Parthenos to appear, but she never did in the end.

…Seriously, what should we do now?


“Hero, I’m sorry for the last time. We intended for the preparations to be thorough, but it seemed we were too naive.”

Because of the unusual encounter in which Ruphas and the Demon King fought, the hero and his companions returned to the kingdom of swords, Lævateinn.

Some people said they were lousy. Sei wanted to shout and tell them to face Ruphas and the Demon King themselves. This was impossible. Even if they gathered hundreds or thousands of people, they could not win.

The king said they were too naive, but it did not change Sei’s thoughts. Indeed, they were too naive. If the elites were assembled…If enough people were gathered…If weapons were collected…It was a complete mistake to think that such petty tricks would be enough to deal with the opponent.

It was impossible to understand…The terror and hopelessness could not be understood by someone who did not witness that battle. One of his companions, Alfie, was so terrified that she refused to join the party anymore. But Sei could not blame her. Even he himself wanted to escape back to Japan if it was possible…

“Alfie’s departure is regrettable. However, be at ease. I have already prepared someone even more elite than her.”

The king spread his arms and introduced the people who were waiting at the side.

“First, the one with the fearsome nickname ‘Oni’, the one recognized as the strongest mercenary, Alfie’s father, Gants!”

At the king’s pronouncement, a bald middle-aged man came forward. A huge battle axe, about the size of a person, was on his back, while a sword hung at his waist. His brand new armor looked mismatched, but it was probably given to him by the king. Looking at his face, Sei inevitably thought that he did not look like his daughter at all. Genes were truly mysterious.

“Second, the party that cleared the Black-Winged Royal Tomb, the adventurers who recovered the treasures therein, Hawkeye! Please, Jean!”

“We accept your royal command, Your Majesty! Leave the hero to us!”

The reply was so full of confidence that it seemed rude. The man was completely dressed like an adventurer. He had brown hair that stood on ends and sharp eyes that seemed to shine. His presence and attitude seemed to suggest that there was nothing to be afraid of. It made one think that he would charge at an enemy even if there was a huge difference in their abilities. Three more people stood behind Jean and nodded confidently at his words.

“And then…I thought it was wrong. The young people who bear the future and the youth from another world are being forced into battle, yet I myself stays in safety on the throne…Yes, this is a self-evident truth. How can the world be saved if oneself is unwilling to plunge into the fire?”

Everyone present was shocked at the king’s self-reproach. Sei had a bad feeling about this, as if the king was about to say something outrageous. The premonition was true as the king shouted something crazy.

“I shall accompany the hero! Let’s save the world together!”

The king rose from his throne and made an idiotic declaration. His aides shouted with expressions like it was the end of the world. But the king continued his speech as if he did not care.

“I may be an old man now, but I too fought in the frontline when I was young! I will not regret my way of life! I shall also be the cornerstone for the future of my subjects! What descendant of the Sword King would not step forward to face death? Soldiers, bring me my sword! Witness the sword skills of Alioth VI, the one with the Sword King’s bloodline!”

“What are you people doing—!?”

At Cruz’s command, the soldiers moved in unison and took hold of the king. The king brandished his arms in a way unexpected of an old man and threw a thousand blows as if he was in a great battle. However, the number of enemies was too great and he was unceremoniously dragged away.

Eh, was this really okay? Wasn’t this treason? The others did not seem to think so.

“No problem. That’s the king’s illness.”

“But isn’t that a treason?”

“It’s always like this. His Majesty is not someone who would be bothered by such things. Although if it was not Friedrich-dono, the person would have been thrown into prison.”

“…Isn’t it necessary for the king to look dignified and majestic?”

“…I have already given up on that.”

Apparently, Cruz was having a hard time with the king. Incidentally, he was the king’s adviser. Well, it must be really troublesome with this king. Was the muscle-brained king even playing his political role properly?

An Amazon who served as the vice-captain (real name unknown).

—What was with this needlessly thick-headed group…?

Sei was feeling very sad for some reason. 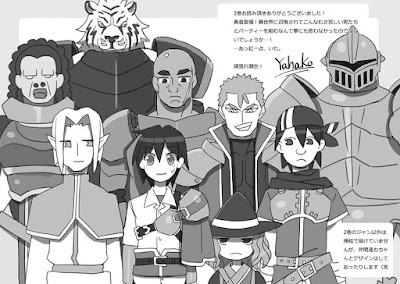 Female knights, mercenaries, beautiful elves, and beastkin. This should be the template for a male hero’s party.

Jean, leader of the party Hawkeye, was Level 38 in Chapter 22. In comparison, the supporting rangers were Level 50, while Alfie was Level 72 in Chapter 43. 🔙