This chapter’s title contains a reference to a Pokémon skill called Mega Punch, which is also what the author’s note is about. As if Sol’s pretentious monologues in Chapter 143 weren’t enough, we get more of them here! Hurray! *sarcasm* Oh, by the way, none of the other characters present should even know what Astraea is… 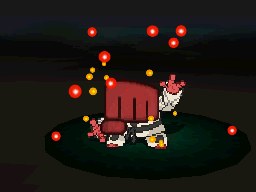