Goodbye, Orm-san. Let’s hope you don’t die…
Last Chapter’s Synopsis
Goddess: “How about it? If I want to do it, I can be the best mastermind! Right? You’ve changed your perception of me, right?” *smug*
Comment: “What an unusual mastermind! But since it’s Alovenus, I guess it’s going to fail…”
Comment: “It’s just a third-rate script, so it won’t make it this time either.”
Comment: “I won’t expect anything from the Goddess’ script.”
Goddess: “I’m going to cry, you know!? I’m really about to cry, okay!?”

This chapter’s title references the text that appears when one is fleeing from a battle in Pokémon. 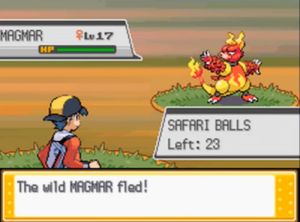 I feel like the author was trying too hard to explain every single detail of Libra’s past behavior. I mean, her memories were corrupted to assist her infiltration, so she’s fooling herself in order to fool others. Any pro-Ruphas behavior could simply be explained by this.
In fact, his explanation just made it more confusing. Prior to her memory repair, was Libra aware of her true allegiance or not? If she wasn’t aware, then it would make more sense that she actually behaved in a pro-Ruphas manner. Calculating every single move to be pro-Goddess just made her seem like she knew of her true allegiance all along…In that case, why even bother having her memories corrupted?
Rather than Libra’s past behavior, I’m more curious about how Pollux managed to sneak up on her. The text just said that Libra had awesome senses a few paragraphs ago! Was Pollux secretly a Level 1000 ninja all along?