The image used is a previously unused image for Ruphas vs. Benetnash fight in Chapter 101. This chapter’s title contains a reference to a Pokémon text that was displayed when using an attack buff. 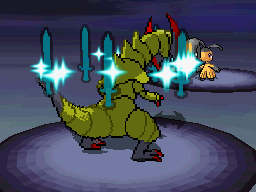 Chapters 171-180 will be hosted over at Two More Free Thoughts.